1 The cover pool consists of residential mortgages and liquid, highly rated assets (substitute assets). Covered bonds are shown inclusive of the market value of the derivatives deployed to hedge currencies and interest rates. Details for the cover pool as of March 31, 2015 is not yet available at the time of writing this report, but only minor changes have occurred since year-end 2014.

Key developments in the first quarter

Total mortgage loans increased moderately during the quarter by 2.7 billion kroner, which was financed by issuing covered bonds in Norwegian kroner totalling 4.8 billion for the quarter.

No issuance in other currencies took place during the quarter. Due to the lending increase, total capital coverage diminshed slightly to 13.97 per cent as of March 31, 2015. The capital requirement inclusive of additional capital/buffer capital is 13.5% as of March 31, 2015 and is scheduled to increase to 14.5 per cent as of July 1, 2015. The Company’s capital coverage target is to be above the minimum legal requirement.

SpareBank 1 Boligkreditt AS is a credit institution licensed by the Norwegian Financial Services Authority (Finanstilsynet) and is operated according to the legislation for covered bond issuers in Norway which is enshrined in the law regarding financial enterprises (“Finansieringsvirksomhetsloven”) chapter 2, section IV and the detailed regulations thereof. The Norwegian Parliament has passed a new law regarding financial companies (‘lov om finansforetak’) which takes effect from January 1, 2016. The law does not have any material impact on the operations of SpareBank 1 Boligkreditt.

The purpose of the Company is to provide funding for the owners by buying residential mortgage loans with a loan-to-value (“LTV”) of up to 75% and financing these primarily through the issuance of covered bonds3. The Company which is based in Stavanger, is owned by banks which are members of the SpareBank 1 Alliance. An agreement is signed with each parent bank regarding the purchase and transfer of residential mortgages and the services which the parent banks owe to the Company and the Company’s customers in this regard (“Transfer and Servicing Agreement”).

The Company’s issuances of covered bonds take place under the EUR 25,000,000,000 Global Medium Term Covered Note Programme (GMTCN Programme). This Programme was updated on April 15, 2014 and is available on the homepage: https://spabol.sparebank1.no.

One or more credit ratings from international rating agencies are important in order to be able to issue covered bonds. The Company have procured the services of Moody’s Ratings Service and Fitch Ratings to evaluate the credit quality of the issuances under the GMTCN Programme. The bond ratings are Aaa from Moody’s and AAA from Fitch.

3 New self-selected criteria for which loans qualify for the cover pool from the first quarter 2014 sets the limit at 70% LTV.

The Board views the accounts as presented to be a true representation of SpareBank 1 Boligkreditt’s operations and financial position at the end of the first quarter 2015.

The total balance sheet amounts to NOK 229 billion vs. NOK 228 billion at the end of the previous calendar year. The Company had during the first quarter net interest income of NOK 103 million compared to 91 million for the period last year, including commissions earned by the ownership banks and accrued as an expense to SpareBank 1 Boligkreditt. The cost of operations for the first six months was NOK 8.2 million including amortisation and depreciation compared to 8.7 million for the same period last year. No additional amounts have been charged as loan provisions (write offs) during the first quarter of 2015, in addition to the NOK 8 million in cumulative group loan loss provisions as of 31.12.14. No actual loan losses have occurred. In total the quarters’ pre-tax result was NOK 320 million compared to 54 million for the same period in. The higher pre-tax result is mostly due to an increase in the book valuation of the Company’s basis swaps, which saw a large increase of 214 million kroner during the quarter.

Lending to customers amounted to NOK 164 billion as of 31.03.2015, which is NOK 11 bn below the level one year ago. This development is in accordance with expectations and is due to that some of the Company’s parent banks bought back some mortgages during the second quarter of 2014. The Company’s liquid assets as of March 31, 2015 amount to NOK 34.5 billion kroner, whereof approximately 25.8 billion kroner are funds received as collateral under ISDA agreements and the remainder is available to the Company as liquid assets as of 31.03.2015.

This fact and the aim of the maintenance of a satisfactory rating means that the Company is subject to low levels of risk and places strong emphasis on risk control.

Credit risk is defined as the risk that losses can occur as a consequence of that customers and others do not have the ability or willingness to meet their obligations to SpareBank 1 Boligkreditt. The portfolio which consists of mortgages up to 75% LTV is the reason for why the Board of Directors assess the credit risk to be lower compared to other banks in general4

Market risk is defined as the risk of losses due to changes in market rates, i.e. interest rates, exchange rates and the prices of financial instruments. At the end of the quarter SpareBank 1 Boligkreditt AS had bonds outstanding (excluding private placements) of EUR 9.85 billion, USD 4.75 billion, NOK 55.9 billion and SEK 0.2 billion. All borrowing and investments with a fixed coupon and all borrowing and investments denominated in foreign currency are hedged by financial currency/and or interest rate swaps or through natural hedges, in order to convert the effective cash flow on this this debt to a NOK floating rate (3 months NIBOR). The Company receives collateral under the derivatives contracts from its counterparties subject to certain thresholds.

SpareBank 1 Boligkreditt AS records cash, bonds and treasury bills at March 31, 2015 for a total of NOK 34.5 billion, whereby NOK 25.8 billion thereof is collateral received from counterparties in swap transactions and is not available as general liquidity. The bonds are essentially Nordic covered bonds and German SSA paper with a triple-A rating from Fitch, Moody’s or S&P. Deposits are placed in banks with a minimum rating of at least A/A2.

The Company had as of 31.03.2015 only moderate interest rate risk and immaterial amounts of currency risk.

Liquidity risk is managed based upon a liquidity strategy approved by the Board. According to the strategy, SpareBank 1 Boligkreditt AS shall maintain a material liquidity reserve with a minimum size of covering all maturities within 6 months and 50 per cent of all maturities between 6 and 12 months. Additionally the Company shall at any point in time be able to meet its interest payments, including derivatives, which come due in the next three months under a scenario where no interest payments are received from the loan portfolio. SpareBank 1 Boligkreditt AS’s liquidity situation is good.

Operational risk is defined as risk of loss due to error or neglect in transaction execution, weakness in the internal control or information technology systems operational breakdowns. Reputational, legal, ethical and competency risks are also elements of operational risk. This risk is considered to be moderate.
The Company is focused on identifying, measure and manage and follow up on central areas of risk which contributes to that Boligkreditt achieves its strategic goals. Please reference the annual report 2014 for more information on this.

4 Eligibility criteria for the sale of mortgage loans to Boligkreditt include a maximum 70% LTV from the end of the first quarter 2014.

The Company has a portfolio of residential mortgage lending with an average loan to value of approximately 51 per cent and no loans are in default.

Residential real estate prices have increased during the first quarter 2015 and stand at a high level. This should be seen in context with declining interest rates in Norway, also for residential mortgages, together with an increasing demand for property in central areas. Even if the unemployment rate is at a low level in Norway, of 3.5 per cent, it is expected to increase moderately in the time ahead. Despite the higher uncertainty in the Norwegian economy the prospects of the Company are good at a stable level.

Economic outlook:
Declining oil sector investments contribute to a decline in the growth rate for mainland GDP which is now expected at 1.1 per cent vs. 2.3 per cent for the preceding years.  The unemployment rate will in this case increase and is seen at 4.1 per cent in 2016.  This will contribute to a dampening of wage growth, which will probably come in below three per cent this year.  Reduced demand from the petroleum sector after several years with strong growth, taken together with a modest development in household consumption expenditures, were important factors behind the cyclical downturn experienced in the second half of 2014.  A pronounced decline in the price of oil through the autumn of 2014 and into 2015 will increase the negative impulses from the oil sector in the time ahead.  A relative expansive fiscal and monetary policy has helped mitigate the downturn in Norway.  There is an expectation that Norway's central bank will continue to decrease its policy rate towards the summer. The decline in oil prices and expectations of lower interest rates have caused the Norwegian krone to depreciate.  This contributes positively to cost-based competitiveness, which stimulates exports and reduces domestic demand for imports which thereby positively impact the activity level in the mainland economy. Increased growth internationally, less negative impulses from the petroleum sector and some increase in private domestic demand is expected to turn the economic cycle to a modest upturn from 2016.

5 Macroeconomic prospects and projections have been sourced from Statistics Norway as of per March 12, 2015.

The Board of Directors affirms that the financial accounts present a correct and complete picture of the Company’s operations and financial position as of March 31, 2015.

No events have occurred after March 31, 2015 which are expected to have a material impact on the accounts for the three months ending March 31, 2015. 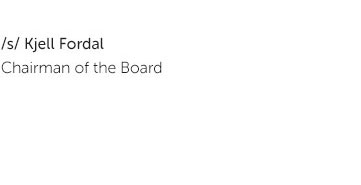 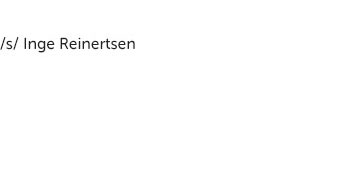 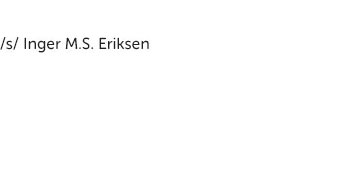 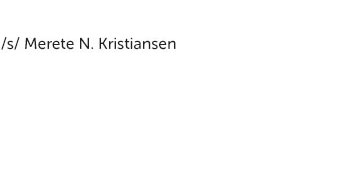 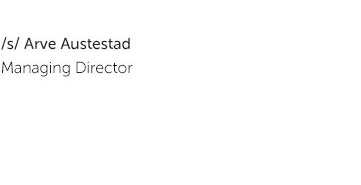 The Board and the chief executive officer have today reviewed and approved the financial accounts for the first three months of 2015 for SpareBank 1 Boligkreditt AS.  The accounts have been prepared in accordance with the International Reporting Standards (IFRS), as adopted by the EU.

To the best knowledge of the board and the chief executive officer the accounts have been prepared in accordance with applicable accounting standards and give a true and fair view of the assets, liabilities, financial position and profit or loss of the company taken as a whole as of March 31, 2015. 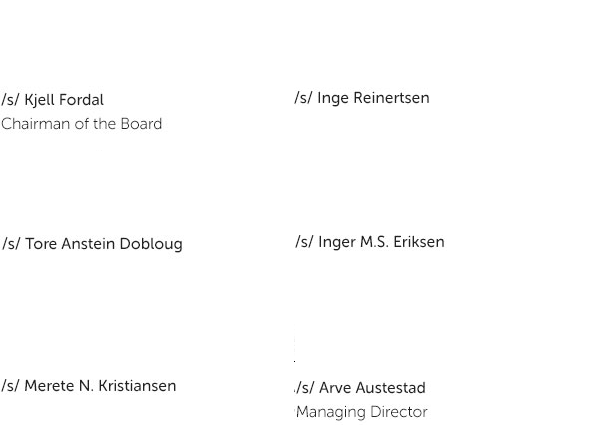